Dr. DiTeresa shines as a luminary in his field, bringing forth nearly 15 years of professional experience to his role with Tomball Adult Internal Medicine, a renowned medical practice based in Houston, Texas. He has garnered a reputation of distinction and prominence, earning such distinctions as the On-Time Doctor Award (2014, 2008), the Compassionate Doctor Award (2013), and Compassionate Doctor Recognition (2009-2013). He is also a recipient of the prestigious Patients’ Choice Award. His work is separated by that of his professional peers by the respect he gives to his patients, and for being easily accessible to his patients.

Dr. DiTeresa is affiliated with St. Luke’s Medical Center, Tomball Regional Medical Center and Houston Methodist Willowbrook Hospital. He became involved in his profession because his seventh grade biology teacher inspired him and sparked his interest in medicine and health care. He remains abreast of trends and developments in his field as a member of the American Board of Internal Medicine, as well.

Dr. DiTeresa earned an MD from The University of Texas Southwestern Medical Center after completing a residency in Internal Medicine through the Baylor Health Care System. Through all of his accomplishments, he marks his proudest moment as seeing his grandparents being a part of the monumental occasion that was his medical school graduation. 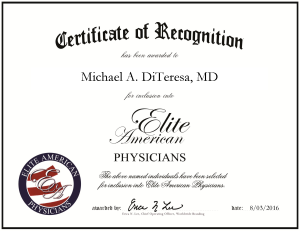