Orange, CT, January 29, 2016, Amiram Katz, Neurologist at Medhead, Inc., has been recognized by Elite American Physicians for dedication, achievement and leadership in neurology.

Dr. Katz was drawn to science at a very early age, and in high school, he was inspired to enter people’s care. Now, with four decades of experience, he specializes in Alzheimer’s disease, epilepsy, Lyme disease, migraine disorders, multiple sclerosis and sleep disorders. In his position with Medhead, Inc., Dr. Katz provides medical care and works in the area of research and development. He also develops and markets proprietary medical devices and treatments. Dr. Katz expects one of his medical products to hit the market in 2016 and save the lives of thousands on an annual basis, by preventing deadly blood clots.

One of his current clinical research trials deals with Alzheimer’s disease therapy. Dr. Katz is attempting to find an alternative to the recently suggested treatment with intravenous immunoglobulin, which is very expensive and cannot be offered to patients due to its high costs.. He hopes to provide a method that will bypass the blood-brain barrier by administering small amounts of immunoglobulin directly into the subarachnoid space via an implanted portal. Using this alternative treatment method, doctors can avoid performing spinal taps and using other unpleasant methods of delivering the medicine and the healthcare organizations will be able to afford this treatment. In addition to managing a private practice and conducting clinical research, Dr. Katz has more than three decades of teaching experience, and has lectured throughout the United States. To date, Dr. Katz has contributed to more than 50 publications.

In 1991, Dr. Katz completed a residency in neurology at Yale University, and in 1989, he completed a fellowship in clinical epilepsy at Yale School of Medicine. He also completed a fellowship in clinical neurophysiology and sleep disorders at Cleveland Clinic in 1988, and a fellowship in medical hypnosis at the University of Haifa in 1985. He completed  a residency in internal medicine at Sheba Medical Center in 1980 and a residency in neurology at Tel Aviv Medical Center in 1984. and earned an MD from Sackler School of Medicine at Tel Aviv University, where he graduated magna cum laude in 1976. In addition, Dr. Katz completed an externship in medicine at Bellevue Hospital in 1973. Dr. Katz was the commanding officer of the Israeli Navy Medical and Hyperbaric Institute in Haifa, Israel, from 1984 -1986 and was honorably discharged from the IDF at the rank of a Colonel. He revived multiple prestigious fellowships and other awards .In the coming years, Dr. Katz intends to continue to provide top-quality medical care to his patients from a practice aspect, and experience continued growth and success from a clinical research aspect with his current clinical trials in Lyme disease, Alzheimer’s disease and Amyotrophic Lateral Sclerosis (ALS), also known as Lou Gehrig’s disease. 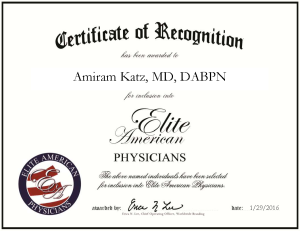