Woodstock, Illinois, January 13, 2011, Dr. Douglas Bryan, Chief of Surgery for the Mercy Health System’s Department of Surgery, has been recognized by Elite American Physicians for dedication, achievements, and leadership in laparoscopic surgery.

An impassioned physician dedicated to his patients, Dr. Bryan has set an example that hard work and networking can propel a career and make a difference in the lives of others. As the chief of surgery for the Mercy Health System, he demonstrates an expertise in laparoscopic surgery, endovascular techniques, and venous disease treatment. His 15 years of professional experience has gained him the reputation of an esteemed physician and the responsibility of performing emergency surgeries at various clinics throughout the Woodstock, Illinois area.

As a child, Dr. Bryan became unusually comfortable in a health care setting. His struggle with asthma meant he spent a great deal of time visiting doctors’ offices and receiving different treatments to assuage his symptoms. While most children become frightened by such experiences, it defined Dr. Bryan’s entire upbringing and structured his desire to help others the way he had been helped. Coming from a family of health care professionals, his career has been, and continues to be, backed by an extremely encouraging support system.

Dr. Bryan earned an MD from SUNY Downstate Medical Center in 1988, after having already received a bachelor’s degree in chemistry from Brooklyn College. He worked diligently toward numerous accreditations to coincide with his goals as a physician. He became a board certified general surgeon, a board certified vascular surgeon, a registered vascular technician, and a registered vascular interpretation technologist by the standards of the American Association of Professional Ringside Physicians.

To keep abreast of industry trends, Dr. Bryan is affiliated with the Midwestern Vascular Surgical Society and the American Medical Association. Considered a fellow of the American College of Surgeons, he was named a top 100 surgeon in 2007. In the coming years, Dr. Bryan hopes to initiate many new advances in the medical field and work hard for the rights of the uninsured. 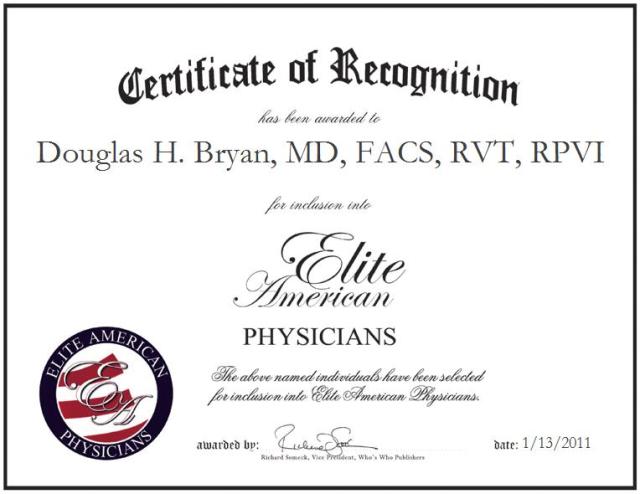